England take on India in India in a 5-Test series. They are the are the fourth non-Asian team to visit Asia this year, and so far all three have not won their respective series. The last non-Asian team to win in Asia was South Africa in 2014 when they beat Sri Lanka 1-0 in 2-Test series.  England is the last team that beat India in India… will they breach the Asian fortress ?.

A quick look at how non-Asian teams performed in Asia this year. Here is a list of primary indicators of those series.

Here are some vital defining facts of the series.

Below table is performance for visiting team in Asia this year(2016).

On the surface this part of their game was reasonable, with 30 times teams it went past 50runs (7 x 100 plus), however it was the collapse that the teams were not able to arrest. This led them to lose the game eventually. The collapse was either at the beginning or in the middle, and the end was always short, as no rescue attempt was made by lower-order and tail-enders to resurgent their innings.

The start was so bad, that 10 times(out of 20 inns) teams lost their first four wickets inside 100 runs. And when the start was excellent which happened in only 4 Inns (50 plus partnerships for opening stand) they collapsed badly. 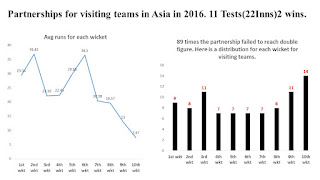